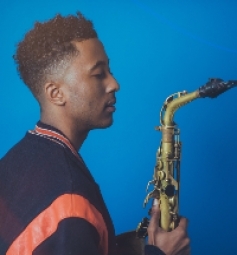 Maryland raised saxophonist, vocalist, multi-instrumentalist, Braxton Cook is a status-quo challenging who first broke out in 2017 on the scene with the release of his solo debut album Somewhere in Between. Heavily influenced by John Coltrane, Charlie Parker, D但ngelo and Frank Ocean, Braxton mixes the improvisatory elements of jazz and the soulful melodies of R&B into a fresh sound all his own. His music pulls from his experience as a Black jazz musician in America and his music aims to speak to the margins in society.
While still a student at The Juilliard School, Braxton began his career touring the world with trumpeter Christian Scott. During this time Braxton recorded and released his first EP called Sketch (2014), quickly followed by Braxton Cook meets Butcher Brown (2015). Following the release of Somewhere in Between (2017), Braxton toured the album internationally performing in London, Japan and across the United States. The album had 4 tracks that landed on Spotify's Top 50 Viral in the U.S. playlist.
Shortly thereafter, multiple tracks from the album were listed on State of Jazz and Alternative R&B playlists and Braxton was even placed on the cover of The Butter Playlist. In Spring of 2018, Braxton worked with a number of West Coast producers (Swarvy, Kiefer, Allmos) to create a collaborative project called Somewhere in Between: Remixes & Outtakes.