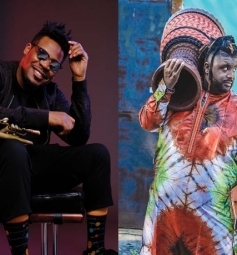 $20 Minimum Per Person
Full Bar & Dinner Menu
NO REFUNDS OR EXCHANGES.
All seating is first come, first served.
Table Seating is all ages, Bar Area is 21+. Bar Area tickets for patrons under 21 will not be honored.
Group Reservations:
Groups larger than 10 must purchase a group package at groupsales@bluenote.net, or by calling 212.475.8592.
Groups larger than 10 without a group package will be subject to group surcharges added to your bill.
Groups arriving late or separately are not guaranteed to be seated together. All seating is first come, first served. Arrive early for best seats.
Tickets for Blue Note New York shows are only available for purchase on Ticketweb. We are not affiliated with any third-party sellers. Tickets purchased on third-party sites will not be honored. The credit card used for original purchase of tickets will be required at the door upon entry.
Keyon Harrold
Keyon Harrold was born and raised in Ferguson, MO, the St. Louis suburb that tore into America’s national consciousness in 2014 with the police shooting of Michael Brown and the bitter protests and riots that followed. While Ferguson looms large in Harrold’s album The Mugician, it examines our troubled times through a far wider lens than any one tragedy. Sweeping and cinematic, the music draws on elements of jazz, classicval, rock, blues, and hip hop to create something uniquely modern, unmistakably American. Guests including Pharoahe Monch, Gary Clark, Jr., Big K.R.I.T., Guy Torry, Georgia Anne Muldrow and Robert Glasper add to the record’s eclectic nature, but it ultimately triumphs as a unified, cohesive whole both because of Harrold’s virtuosic skill as a trumpeter and songwriter and because of his relentlessly optimistic belief in brighter days to come.
Harrold grew up one of 16 children in a family that prioritized music and community across generations. His grandfather was a police officer who retired from the force to found a drum and bugle corps for local youth, both of his parents were pastors, and nearly all of his siblings sing and perform music today. Culture shock hit Harrold hard at 18, when he left Ferguson for New York City to enroll in The New School. In New York, he landed his first major gig with Common, an experience which he says broadened his musical horizons beyond jazz to include funk, Afrobeat, R&B, and hip hop. Soon he was performing with stars like Snoop Dogg, Jay Z, Beyonce, Rihanna, Eminem, Maxwell, and Anthony Hamilton.
In 2009, he released his solo debut, Introducing Keyon Harrold and then won wide acclaim for his trumpet performances in Don Cheadle’s Miles Davis biopic Miles Ahead. The Mugician is a portmanteau of “musician” and “magician, a nod to a nickname Cheadle bestowed upon the young virtuoso, and it’s an apt descriptor for a record that pushes beyond the traditional boundaries of jazz trumpet. In fact, the album doesn’t even begin with trumpet, but rather with a track called ‘Voicemail,’ which features an inspirational message from Harrold’s mother set to a stirring, orchestral soundscape. Entirely unedited, her words lay the groundwork for an album that celebrates the importance of family (ten of Keyon’s siblings appear on the record) and the absolute necessity of optimism in the face of darkness and doubt. These days, Harrold is a parent himself, and he pays tribute to his son with a pair of tracks on the album, “Lullaby” and “Bubba Rides Again.” Issues of identity and equality percolate throughout the record, sometimes subtly beneath the surface, sometimes more pointedly, as in “Circus Show.” However, the album’s most powerful moments come with the one-two punch of “MB Lament” and “When Will It Stop,” songs written in the wake of Michael Brown’s death and the senseless killings of so many others like him.
It’s a monumental task, one that calls for tremendous empathy and sensitivity. To give voice to the silenced requires more than just talent and ambition, it requires faith, imagination, strength, and determination. Above all, it requires perspective. Fortunately, that is what Keyon Harrold brings most of all.
Weedie Braimah & The Hands of Time
Weedie Braimah is a young premiere master of the djembe. He began his career at the early age of two, born in Ghana, where he was first introduced to West African culture and drumming. In East St. Louis, which is considered home for Braimah, he began his life long quest and professional career in the study of cultural music of the diasporas. A maverick performer of the highest caliber, Braimah has an almost insatiable knack to draw the entire audience into his grove, zigzagging through Africa on a breathtaking rhythmic roller coaster.
Braimah comes from a long lineage of musicians; including his mother, a respected jazz drummer and his father, a world renowned composer and master drummer. Having studied with the greats such as Mamady Keita, Famadou Konate, Abdoul Doumbia, and Fadouba Oulare just to name a few, it was no surprise that Braimah excelled musically and became well known on the drum and dance circuit. Braimah has been a performer, teacher and preserver of African culture for over 20 years and continues to peruse new musical journeys every day.