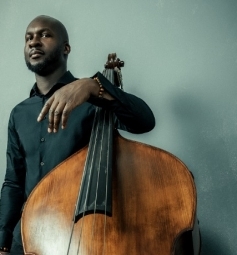 Full Bar & Dinner Menu Available
Seating is First Come, First Served. Arrive early for the best seats. Parties arriving separately or late are not gauranteed to be sat at the same table.
Table Seating is All-Ages, 21+ at the Bar. Please do not purchase Bar Area tickets if you are not 21 years old. Your ticket will not be honored.
NO REFUNDS OR EXCHANGES.
Please make sure you purchase tickets for the correct date and time.
Michael Olatuja
Jazz
Bassist Michael Olatuja is celebrating the release of Lagos Pepper Soup: his spectacular blend of West African Afrobeats and jazz, backed by a string orchestra, arranged by iconic film music arranger Dave Metzger, the top orchestrator for Disney, with an International All-Star cast featuring: Angelique Kidjo, Dianne Reeves, Brandee Younger, Lionel Loueke, Regina Carter, Joe Lovano, Laura Mvula, Gregoire Maret, and Becca Stevens.
The London-born, Lagos, Nigeria-raised, New York-based electric and acoustic bassist/composer/bandleader Michael Olatuja has been one of the most inventive and in-demand bassists since the early part of this century. He’s worked and recorded with one hundred artists, from Terence Blanchard, Kurt Elling and Jose James to Stevie Wonder, Shakira, and Bebe Winans, and recorded two CD’s as a leader, Speak (2009), which the website All About Jazzproclaimed was “a propulsive and pleasing record,” and The Promise by The Olatuja Project - a duo with Alicia Olatuja (2011). Nearly five years in the making, Olatuja’s new, twelve-track CD, Lagos Pepper Soup, named after a zesty, West African meal, with lyrics mostly in Yoruba and English, and recorded in London and New York, is his most comprehensive and compelling album to date.
“The themes [on this new record] are hope, inspiration, and new beginnings,” Olatuja says. “This recording started at a very tough time in my life, and it’s cathartic and healing. I had to separate myself into two people: my older self, and my younger self, as if the older me were speaking to the younger me, encouraging me, and thus, encouraging whoever’s listening. That was the motivation for how this album happened. Most of my recordings are like that: Whatever season or journey I’m going through in my life, the music speaks to myself [and] others.”