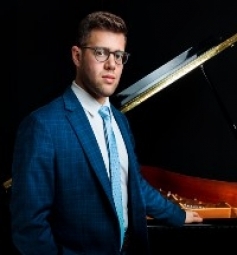 Steven Feifke, born June 21st, 1991, is a prolific pianist, bandleader, composer and educator who has become a fixture on the New York scene. A regular at key venues including The Blue Note, Smalls, and Dizzy's Club Coca-Cola, he also frequently works as a musical director, conductor, orchestrator and arranger and maintains his own big band, septet, and trio. His orchestrations for chamber ensemble, big band, and orchestra can be heard on numerous albums by artists like Veronica Swift, Santino Fontana, and Ulysses Owens Jr. Feifke has also written original works for television and film media, and his music can be heard on the hit Netflix TV show "Comedians In Cars Getting Coffee," produced by comedian Jerry Seinfeld. He holds a Bachelors Degree in Jazz Studies and a Minor in Economics from New York University (2013), along with a Masters Degree in Jazz Composition from Manhattan School Of Music (2018). Feifke serves on faculty at The New School in New York City, where he teaches composition and arranging. His debut album is "Peace In Time," released independently in 2015. This is his debut performance as a bandleader at The Blue Note, NYC.